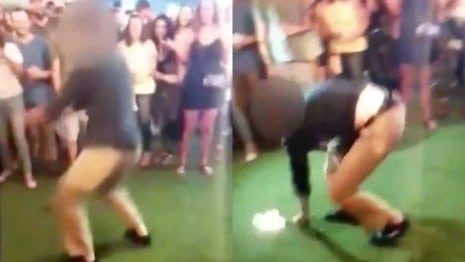 Are nightclub backflips dangerous? Umm, could be.

​When enjoying your night out with friends, the last thing you expect is to see a gun flying out of someone’s waist band. Recently, an off-duty FBI agent was dancing at a Denver night club when he decided to add a backflip to his dance routine. While he does have some smooth moves, unfortunately for him, his loaded gun fell out of his waistband and hit the floor.  While he was picking up the gun it discharged, shooting another person in the leg. Such reckless behavior will likely lead to civil claims and criminal charges for this FBI agent.

Fortunately, early reports indicate the victim will soon recover from the wounds but their are many questions arising out of this event. Will this dancing FBI agent be held responsible? Does his employer, the FBI, have liability? What about the club for allowing an armed patron inside the club? Is there a workers’ compensation claim to be made?  Any other legal remedies for the injured? Lots of legal questions here to be answered.

​The injured person potentially has several avenues for relief. He could bring a civil claim against the shooter, including claims for negligence, wantonness, battery, and intentional infliction of emotional distress, while seeking  compensatory and punitive damages.

​There could also potentially be a claim against the employer for the injuries the victim suffered.  If the agent was in Denver on a work trip, the FBI could have been liable; however, it appears he was on a personal vacation. The FBI might also take actions against their employee, including asking him to take an extended period of leave or terminate his employment.

​The identity of the victim is still unknown. What if the victim was a bartender or worked in another capacity at the club? Could he have a workers’ compensation claim against the bar? Yes, so as long as he was working in the line and scope of his employment at the time of the accident.

What if this accident occurred in Alabama? Same issues should be addressed. For those bartending or working at a club, make sure you are aware of the potential recourse you have if something like this were to happen to you. Document everything. Make sure all witnesses stick around and are willing to cooperate. All of this will help you succeed in either a workers’ compensation claim or a civil action against the tortfeasor.

​Ultimately, whether or not the FBI agent will be criminally charged is up to the Denver district attorney’s office. The police are investigating whether the agent had been drinking. As of now, the agent has not been charged criminally. Stay tuned!

CNN has the story (and video, of course).

Bernard D. Nomberg has been a lawyer for more than 20 years. Bernard has earned an AV rating from Martindale-Hubbell’s peer-review rating. He has been selected a Super Lawyer by Super Lawyers Magazine as well as a Top Lawyer by B-Metro Magazine. Bernard is the Chair of the Alabama State Bar’s Workers’ Compensation Section.